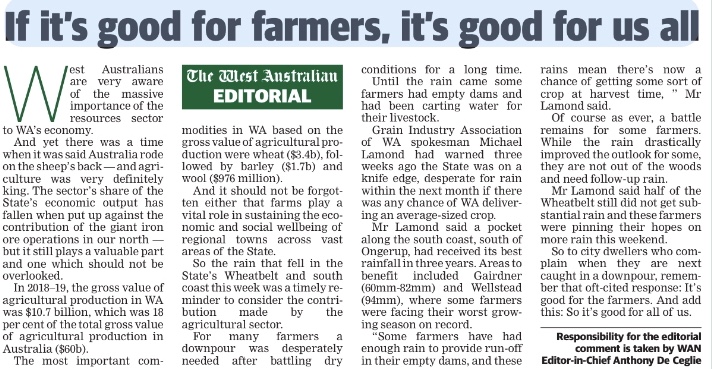 Editorial by Anthony De Ceglie courtesy of the West Australian

West Australians are very aware of the massive importance of the resources sector to WA’s economy.

And yet there was a time when it was said Australia rode on the sheep’s back — and agriculture was very definitely king. The sector’s share of the State’s economic output has fallen when put up against the contribution of the giant iron ore operations in our north — but it still plays a valuable part and one which should not be overlooked.

The most important commodities in WA based on the gross value of agricultural production were wheat ($3.4b), followed by barley ($1.7b) and wool ($976 million).

And it should not be forgotten either that farms play a vital role in sustaining the economic and social wellbeing of regional towns across vast areas of the State.

So the rain that fell in the State’s Wheatbelt and south coast this week was a timely reminder to consider the contribution made by the agricultural sector.

For many farmers a downpour was desperately needed after battling dry conditions for a long time. Until the rain came some farmers had empty dams and had been carting water for their livestock.

Grain Industry Association of WA spokesman Michael Lamond had warned three weeks ago the State was on a knife edge, desperate for rain within the next month if there was any chance of WA delivering an average-sized crop.

Mr Lamond said a pocket along the south coast, south of Ongerup, had received its best rainfall in three years. Areas to benefit included Gairdner (60mm-82 mm) and Wellstead (94mm), where some farmers were facing their worst growing season on record.

“Some farmers have had enough rain to provide run-off in their empty dams, and these rains mean there’s now a chance of getting some sort of crop at harvest time, ” Mr Lamond said.

Of course as ever, a battle remains for some farmers. While the rain drastically improved the outlook for some, they are not out of the woods and need follow-up rain.

Mr Lamond said half of the Wheatbelt still did not get substantial rain and these farmers were pinning their hopes on more rain this weekend. So to city dwellers who complain when they are next caught in a downpour, remember that oft-cited response: It’s good for the farmers. And add this: So it’s good for all of us.